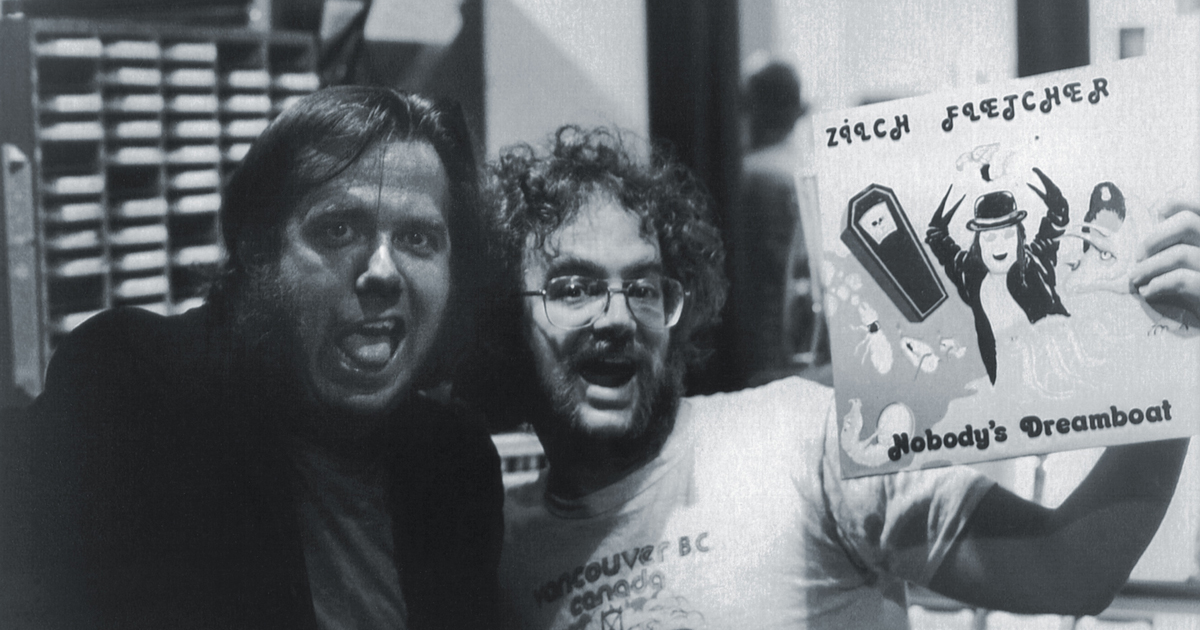 In the late 1970s, Medina musician John Martin recorded an album called “Nobody’s Dreamboat”, a collection of 14 psychedelic folk songs partly inspired by science fiction films. They had titles like “The Ballad of Bloody Guts” and “Armpit Farts”, which corresponded to the mysterious musical alias he used: Zilch Fletcher.

The initial release of “Nobody’s Dreamboat” was limited to 1,000 records, but some songs were broadcast nationwide on popular novelty DJ Barry’s “Dr. Demento” Hansen’s subscribed radio program. His tricks have made Zilch Fletcher a name to remember among loyal listeners.

“I have a split personality,” says Martin, 76, laughing at his pseudonym.

Decades later, the moldy and damaged master tape of “Nobody’s Dreamboat” slept in Martin’s attic in Medina. But last winter his daughter Katy finally dug it up and decided the time had come for “Bloody Guts” to go digital.

“I just realized I have to do it now,” Katy said. “People who know Zilch – his quirk and obscurity – there’s a strong following there. And because it hasn’t been online, I just feel like there are more people, new generations, new potential audiences. I think it’s worth preserving history.

Almost a year later, “Nobody’s Dreamboat” is available to stream on Spotify, Apple Music, and Amazon Music. On December 17th at the Lovin ‘Cup, Zilch Fletcher himself will be there to celebrate this digitization and hear local musicians, including his daughter’s band, The Local Hang-Ups, breathe new life into his 1977 songs. It’s a fitting resurrection for an album that tells tales of coffin theft, mole men and mistaken identities, all of which come to life with remastered sparkle.

Even by the time he recorded “Nobody’s Dreamboat”, Martin had lived the life of a traveling musician. In the early 1970s he performed with his band Sarofeen and Smoke before moving to Tennessee on the advice of a friend.

There he took the name Zilch Fletcher, opened for Townes Van Zandt and Marshall Chapman, and recorded songs with country star Ray Stevens. “When I first came to Nashville, I just wanted to keep quiet about my real name,” Martin says. “I just wanted to be a mystery.”

Dr Demento has given this mystery a boost. In July 1977, he invited Martin to perform live on his California show; Zilch Fletcher picked up his guitar and sang “The Ballad of Bloody Guts” and two other tunes, sending his sounds across the country. Zilch’s songs remained favorites on Dr. Demento’s program, even reaching a young “Weird Al” Yankovic, whom Martin later met at a Dr. Demento party. “He remembered listening to me before he signed his first contract,” says Martin.

Over the decades that followed, Zilch Fletcher’s music had largely become a collector’s curiosity. Katy Martin’s rediscovery of the master tape prompted her to get it back, so she called in Rochester, where she lives.

When she called Bop Shop Records, she reached out to Matthew D. Guarnere, a local archivist specializing in digital restoration. He had seen the record come out of the store but hadn’t heard it. Katy brought him the tape, and Guarnere, though excited to dig, saw he had his work cut out for him.

“There were things growing on it,” he says. “There was a question of whether the tape would even be played or not. I had tapes in pretty awful condition, but this one looked exceptionally rough.

About a week of special restore processes followed: a hot air tank to remove mold, dehydrate the tape, and correct major audio issues. Katy has received regular status updates. “I was laughing because it sounded like a sci-fi movie [with] the different machines, ”she says.

With the diligent work of Guarnere – including pulling restored pieces from the original vinyl to fill in the missing pieces of the tape – “Nobody’s Dreamboat” has been remastered and digitized. At Lovin ‘Cup, his work continues: he will cover “Bloody Guts” in homage to the man who wrote it, linking more the thread of the past to the present.

“That’s what’s so great about Zilch Fletcher – he always walks the dirt,” says Guarnere. And his message, he adds, remains universal: “At the end of the day, the bottom line is that we are all a bunch of bloody guts. “

Matt Guarnere, The Local Hang-Ups, Bunch of Bloody Guts and the “A” Blues Band perform songs from “Nobody’s Dreamboat” as part of the album’s digital release party on Friday, December 17 from 6 p.m. to 9 p.m., at Lovin ‘Cup, 300 Park Point Dr., Rochester. To free. 585-292-9940. lovincup.com; facebook.com/zilchfletcher.