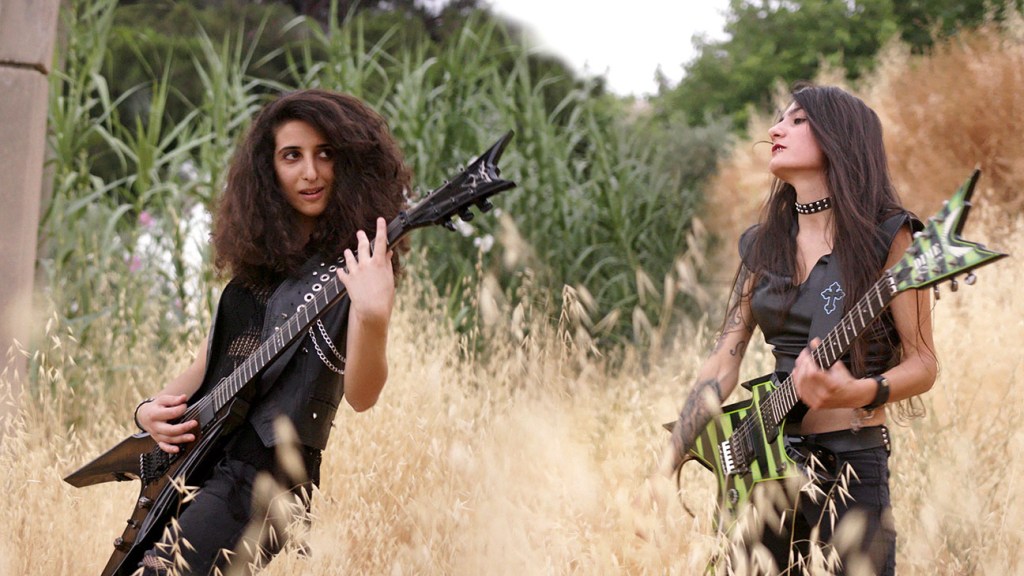 More people need to watch Nida Manzoor’s comedy Peacock We are lady parts so it’s quite clear that when I say Rita Baghdadi’s Sundance documentary Sirens is essentially a non-fiction version of We are lady parts, it is very complimentary.

It means that Sirens is audience friendly about the intersection of gender, sexuality, and aggressively loud music in a culture that isn’t always open to deviations from the norm. And if my main complaint about We are lady parts was that it was too short at just six half-hour episodes, I have similar reservations about Sirens, which is only 78 minutes long and feels a bit abrupt and jerky in places. But it’s a complaint born more out of pleasure than anything else.

Too short and jerky, but utterly charming nonetheless.

Baghdadi’s film, in competition at Sundance, is set primarily in and around Beirut and centers on Lilas and Shery, co-founders and guitarists of thrash metal band Slave to Sirens. Lilac and Shery have a successful creative partnership, but a volatile friendship complicated by a previous romance. The uniqueness of Slave to Sirens’ in-your-face style in a country with changing views on in-your-face women earned them press attention and even an appearance at the UK’s Glastonbury Festival. Can Slave to Sirens break out before they go their separate ways?

All this, of course, in the context of a country in constant political and societal evolution. Lilac and Shery met at a protest and at least one of their regular fights takes place as young people march down the street behind them. Additionally, Baghdadi was filming in 2020, and the aftermath of the Beirut port explosion is woven into the second half of the documentary.

Oddly enough, COVID-19 isn’t mentioned at all – some people in the background of some shots are wearing masks, but… they might have anyway – and I would feel like the pandemic was directly responsible for some of the shortcomings in Baghdadi’s filming and the ebb and flow of the group’s journey. But I’m only guessing that based on contextual detective work – the absence of a Glastonbury festival in 2020 and 2021, and then the Beirut explosion in the fall of 2020 – rather than a textual explanation .

As it is, Sirens tries to be both a fairly linear and formally conventional documentary – no criticism there – in which you can often wonder “But what about…” or “What happened to…” or “How did we get to…” questions before an ending that feels more like surrender than conclusion.

These things bothered me mostly because Sirens is so generally entertaining and interesting.

Lilas, who lives with her mother and younger brother and teaches music by day (or did until she stopped being mentioned, again possibly due to COVID), is intense , funny and talented. At some point, she gets a new girlfriend, who bears a non-coincidental resemblance to Shery.

Shery is less open about her personal and professional life, but she’s clearly a dynamite musician, and the scenes with the whole band together are awesome. In concert, they rock shamelessly, and the Glastonbury sequence, although brief, is remarkable. And when the band is just casually jamming and working on songs together, there’s some of that same inventive energy that people dug into Peter Jackson’s recent Beatles documentary.

The documentary focuses more on the universal than the unique, which is probably progressive in its own way. Lebanon is a secular country with a Muslim majority, but religion is never really addressed in the documentary. It’s a country more open to LGBTQ rights than many others in the region – ‘Homophobia is a crime’ scrawled in graffiti is one of the first images in the documentary – which isn’t to say it isn’t. There are no laws that could make life difficult for our characters, although this is referenced to a minimum.

Lilas and Shery both speak near perfect English and alternate fluently between it and Arabic. The focus, both for the documentary and for Slave to Sirens, is accessibility, offering a very different perspective than what Western-produced television and films tend to portray when it comes to Lebanon.

Baghdadi, who is her own cinematographer, searches for beauty around Beirut, films in the hills and among the unproverbial cedars of Lebanon, capturing conversations that take place on the beach as the sun hits the Mediterranean just to the right . The city’s unique architecture is accentuated even as columns of ominous smoke rise in the background.

Sirens feels like a festival audience favorite, and with big-name executive producers like Natasha Lyonne, Maya Rudolph and former Netflix bigwig Cindy Holland, it feels like a film that could get real real visibility. And it deserves it. Wanting more is a criticism, but it is a luxury criticism. This documentary builds a world that you want to explore further.