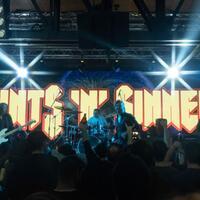 Kiss and Whitesnake, two legendary rock groups who have marked the music world for more than 40 years, prepare to say goodbye to their beloved fans at a series of events in which Saints’ N ‘Sinners, a Turkish power metal giant, will also be a part of.

The group from Istanbul, which enjoys a great reputation mainly in Eastern Europe, will be on stage on July 16, 2022 at the “Rock The City” festival in the Romanian capital of Bucharest, alongside Kiss, Whitesnake and Powerwolf. .

Taking place after a three-year hiatus due to the pandemic, the 11th edition of the festival will be one of the final stages of the two legends’ separate farewell tours in which both have released albums that have sold over 100 million. of copies.

Becoming one of the few Turkish groups to have participated in such a prestigious event in recent years, Saints ‘N’ Sinners is expected to salute their fans with notable hits such as “Renegade Lawmakers” and “Seven Years in Hell”. and offers an unforgettable experience with its enthusiastic stage performance.

The group will also perform a few songs from their new album, which is about to be released after a long hiatus at the event.

The festival will be one of the last events in which the active careers of 49 years of Kiss and 44 years of Whitesnake will end.

In addition to the legends, Powerwolf, a German group that was due to go on tour this summer but had to cancel it due to the pandemic, will present their latest studio album in Bucharest.

Tickets for the event are already on sale.