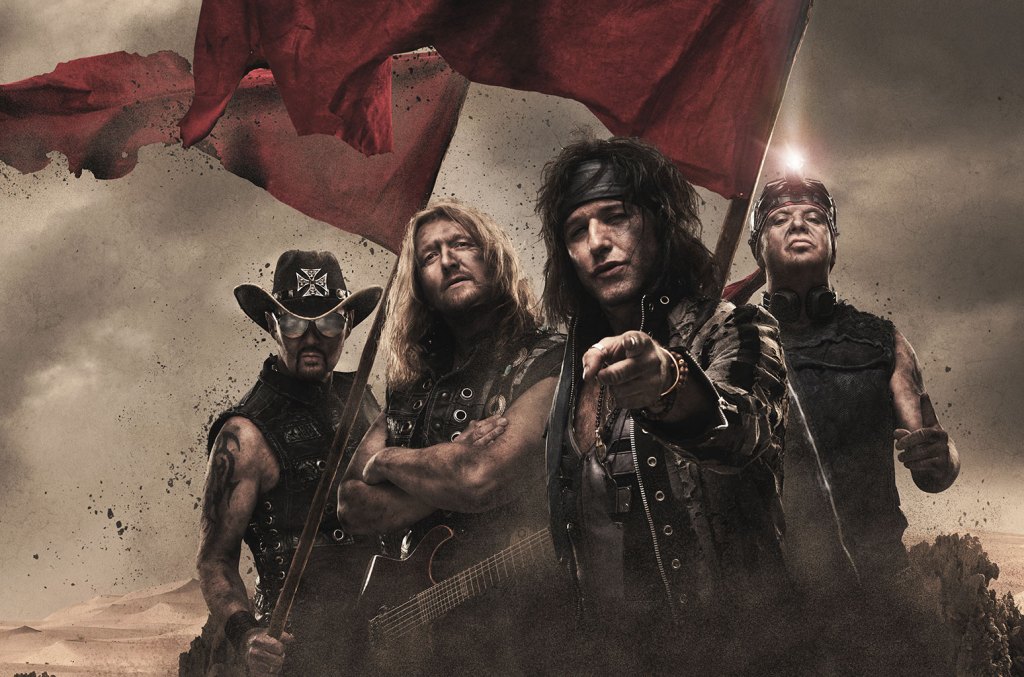 The video is patently absurd. Wrestler-turned-movie-superhero John Cena, wearing the ridiculously shiny Peacemaker bucket helmet, does a choreographed line dance while waving his middle finger and pointing guns to the screaming hair metal song “Do Ya Really Wanna Taste It” with sound Peacemaker cast mates.

It’s the opening sequence for director/creator James Gunn’s irreverent, blood-splattered HBO Max series about the DC superhero everyone loves to hate, with a soundtrack for the two-step-on-stilts provided. by a little-known Norwegian spandex band called Wig Wam. And just like Peacemaker’s rescue from dastardly superhero prison through “Project Butterfly,” Gunn’s left-wing song choice for the buzzy title sequence saved a shattered Wig Wam from a near-fatal career death spiral. .

“Three days before the Peacemaker [Jan. 13] first our [Scandinavian] booking agency [United Stage] knocked us off their rooster, because there was too little interest in the band,” says singer Åge Sten Nilsen (aka “Glam”). Billboard on the low moment for the proudly anachronistic teased hair metal band. Formed in Norway in 2001, Wig Wam released four glitter-soaked, tongue-in-cheek hard rock albums before splitting in 2013 – Nilsen said they were just sick of each other – and eventually reuniting in 2019.

“I told them maybe they should wait a few days,” Nilsen said of the request he made to their agency representative last November. “But they didn’t.” By then they already knew “Taste It” would be in the show’s title sequence and the band were just looking for warm-up gigs to help prime the pump for what the singer assumed was heightened interest, thanks to the show.

Long story short: Nilsen says the combination of the ongoing COVID-19 pandemic restrictions, United have reduced their roster due to a lack of live shows during the lockdown and the long layoff since the band’s last gigs in 2013 led the agency to balk at any new bookings. Fast forward to January 7 this year when Wig Wam discovered they had been dropped from United’s roster less than a week prior. Peacemakerdebuts on HBO Max.

“Firstly let me say that I fully support the band. They are a real gem of the Scandinavian rock scene and lovely guys to work with,” United’s Jan Roger Andreassen said. Billboard in an email, in which he raves about the show and the song’s use in the title sequence. “I really hope this soundtrack gives them all the much-deserved attention beyond their original fan base.”

Andreassen explains that few promoters were looking to book bands in December, and because he couldn’t offer the band the types of reboot shows they were looking for, he “asked them to go explore opportunities through them. -same”, deleting the group. from the list on the United website.

Now, he admits, the “timing could have been better!” And while United had been aware of the song’s placement ‘for some time’, they were unsure how significant the take would be. “Usually a song featured on a TV series is less important to ticket sales and concert bookings than you might think,” he says, adding with a wink emoji, “This time it will be maybe different.”

The over-the-top, hip-swiveling “Taste It” appeared on Wig Wam’s fourth studio album, in the 2010s Rock ‘n Roll Non Stop, and Nilsen says it’s “really the story of my life”. Written in minutes by vocalist and guitarist Trond “Teeny” Holter, it tells the age-old story of his efforts to succeed in the music world with lyrics such as “Make a pose, short to your dreams/ Float straight aux stars on that flying thing,” before diving into the chorus: “Do you really, do you really want to taste it / What goes up must come down.

The band, formed more than a decade after the heyday of hair metal, have always felt like “characters from another age”, says Nilsen. “Just like Peacemaker, wearing his ‘suit’, or uniform as he calls it. We, too, got quite a bit of backlash for wearing spandex and platform boots.

In keeping with Gunn’s love of musical themes – like the comeback mixtapes he did for the guardians of the galaxy movies — Peacemaker is larded with oblivion or deep cut hair metal songs 1980s and 90s and little-known sleaze metal 2.0 jams, which is why “Taste It” fits right into the mix. His story of endeavors is particularly fitting for the lost soul Peacemaker – whom Gunn called “a piece of shit” and “the biggest asshole in the world” – a superhero determined to find a second act and avoid prison. .

“[The song] was a comment to me on how easily you lose your soul when you succeed and everything is handed to you on a silver platter. Fame can become very destructive,” says Nilsen. (For a taste of Wig Wam’s exquisite bad taste, check out the official site, purposely corny Video “Taste” from 2010, or what Nilsen says was a “involuntary” insight from Peacemaker credits on norway The shock of the choirs reality TV show of the same year.)

The band – who released their fifth studio album, never say die, last year – sent a few versions of the song when they got the TV sync request last year, assuming it was, at best, a commercial or some other project discreet. They eventually found out it was for a TV series, and it wasn’t until after an offer was made that they learned it was Peacemaker. “We didn’t know anything about the dance and the opening sequence,” says Nilsen, who admits the band didn’t have “the slightest clue” of what a Peacemaker has been. “But we were really surprised and blown away when we saw it at the premiere.” Now, of course, they’re super fans of the show and the extended set. suicide squad universe.

As for Gunn, whom Nilsen calls “the king,” the singer says that if he ever meets the director, he “will get down on his knees, kiss his hand and thank him from the bottom of his heart for using our songs, showcasing our gender.” music and just to be the king of the comic book world that he is.

And, just like Peacemaker’s second chance, it all works out in the end for Wig Wam. Nilsen says a “big agent” from Spain is now handling their booking, and “their phone lines are on fire right now” – with a few gigs on the horizon, including their very first shows in the US. Additionally, he says the group’s streaming numbers are growing and they are getting requests for bookings all over the world. “I can’t wait to go out there with the boys to Wig Wam y’all,” he said.

Watch the credit sequence below.