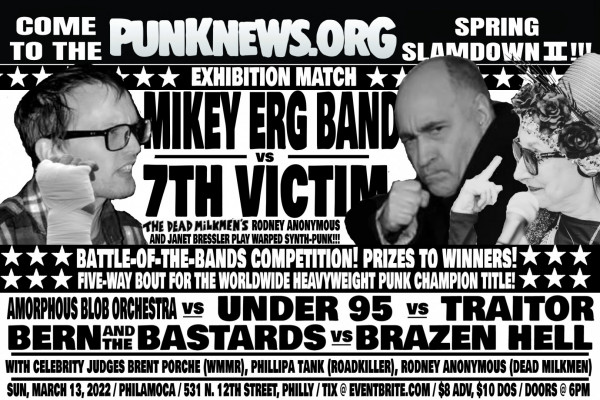 Mikey Erg Band and the 7th victim of Rodney Anonymous will rumble Sunday in Philadelphia at Spring Slamdown 2!

SUNDAY! SUNDAY! SUNDAY! Everything is linked!!! The group Mikey Erg will face 7th Victim with Rodney Anonymous of Dead milkmen and Janet Bressler in a spectacular bash-o-rama! Incredible musicianship, lyrics and rock will dazzle and dazzle you beyond belief as these two punk titans go head-to-head in a one-night-only exhibition match! You will never be the same again!!!

And before that, it’s a five-way battle between the bands to see who will hold the belt of punk heavyweight champion of the world! Under 95 kick out the racing punk skate! Traitor beat him and smash that metal riffage! Bern and the bastards launch gothed pop-punk! brazen hell pull out some crushing Motorhead-style punk! And then there’s the mysterious contestant known only as “The Amorphous Blob Orchestra…”

Plus, we have three famous judges who decide who wins and who LOSES. Behind the table are: Brent Porch from 93.3 WMMR! Phillipa Tank from Roadkiller! and… the main man himself, Rodeny Anonymous!!!

This historic fight will take place THIS SUNDAY, March 13 at the beautiful Philamoca Arena in Rocky’s hometown of Philadelphia! Address: 531 North 12th street, doors are at 6 p.m. and the first fight bell is at 6:30 p.m. sharp. Do not be late ! AND! Tickets are only $8 in advance! wow! We’ll see each other there!!!!! GET TICKETS HERE! TO VERIFY THE FACEBOOK EVENT HERE!