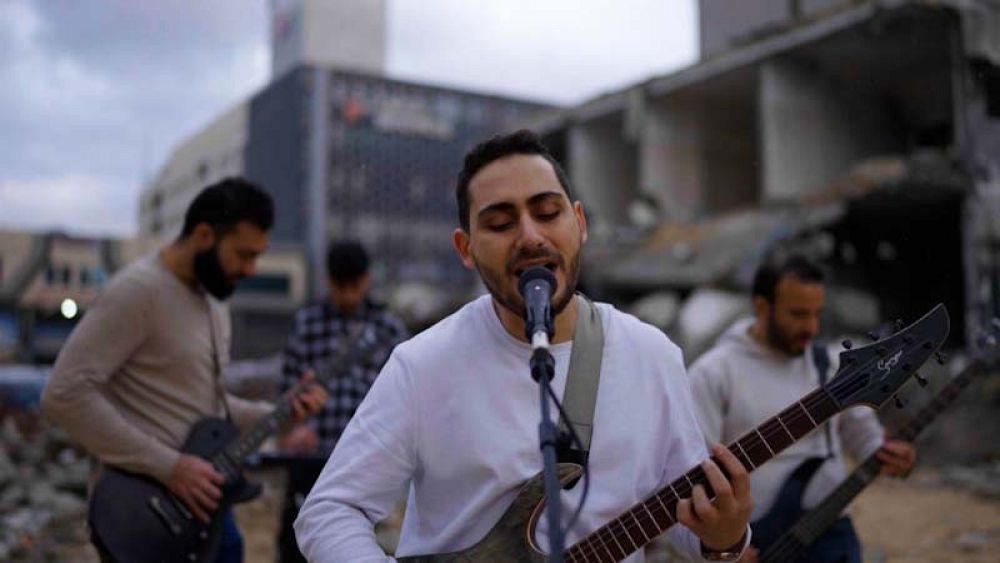 SCENES shines the spotlight on young people around the world who are breaking down barriers and creating change. The character-driven shorts will inspire and amaze as these young changemakers tell their remarkable stories.

A group of young men working as accountants, lawyers and agronomists founded what may be Gaza’s first rock band. Osprey V, named after the bird of prey, stepped into the musical spotlight, singing on the themes of war, pain and peace.

Their story started as a hobby. With no youth music centers in Gaza, the cousins, Moamen, Raji and Saed Jaru, decided to learn on their own, “without Youtube and Google, we would never have had the chance to know rock music,” says Raji.

They soon started playing and composing their own lyrics, “We used to jam together, and then at some point a lot of people saw what we were doing and liked what we were doing. They asked us, ‘why not take it to the next level?’ It was like a childhood dream that we took to a professional level,” recalls bassist Moamen.

Raji relishes his role as lead vocalist and Saed showcases his talent as lead guitarist. When Osprey V needed a drummer, Swiss aid worker Thomas Kucherhans joined him while he was doing humanitarian work in Gaza.

Launching a music career in Gaza certainly had its challenges. The band worked with limited resources from the start, “we jammed for about an hour or half an hour and then the power went out,” recalls Moamen. Before the opening of the first music store in the Gaza Strip, they also struggled to find the right equipment. Then there was the lack of specialized studios to record their tracks.

Another obstacle for them was that they felt that some people in Gaza were not used to or interested in Western music. Many objected to this genre being so different from traditional Palestinian folklore, but that didn’t stop Osprey V. “Rock music in the world is something that has always been stereotyped: people screaming. It’s not rock music, rock music is a philosophy,” insists Moamen.

Raji also points out that the genre was born out of the suffering and destruction during World War I, and that no other form of music would be able to express Palestinian suffering.

“We will cry out our pain, do you hear the call? pleads their song ‘Home’. “This song is about our true feelings and emotions behind that word ‘home,’ which we don’t really understand because we miss it,” Moamen said. Raji explains how every feeling they have, everything they have witnessed is a storyboard for the lyrics they write to fully express themselves, “we try to deepen their pain, the depth of their deprivation”.

For Osprey V, getting its message across to an international audience is essential. They sing in English so that more people can clearly understand their struggle. Their main stage is social media to reach every corner of the world, but they want to go further. “Our main dream as a band is to enter the international stage to spread our music all over the world,” says Raji. They hope to travel, gain new experiences and participate in international concerts.

The group continues to work hard to be accepted in a sometimes conservative society but their first concert proved to be a success, with many people, including foreigners, attending the event in Gaza. They were also part of an online event called Live for Gaza. It brought together music stars, including Roger Waters of Pink Floyd, to raise funds for musicians in the Palestinian territories.

“We want to be a source of inspiration for musicians and artists from here and elsewhere. We want to tell the world that we can overcome our difficulties and communicate with each other in very beautiful ways,” says Moamen. With these lofty goals, despite the obstacles and lack of support, Osprey V shows no signs of slowing down.