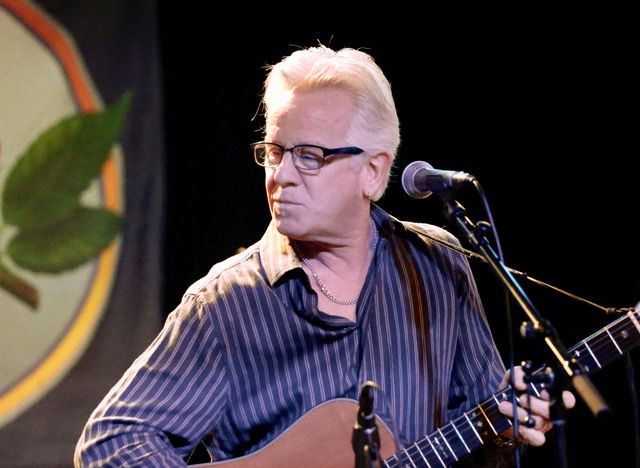 What do you do after the lead singer of a superstar band you’ve been in for four decades suffers from hearing loss and can no longer sing, bringing a brutal end to a multi-platinum career? Are you retiring and resting on your laurels? Buy a ranch and open a winery? Snuggle up in a little ball and cry?

If you’re Johnny Colla from San Anselmo, founding member of Huey Lewis and the News, you keep doing what you’ve been doing all your life: making music.

Multi-instrumentalist and singer, Colla has just released “I Hear Other Voices !! (Hardly Strictly A Cappella) ”, an album of classic 50s and 60s R&B, pop and doo-wop he worked on at home during the pandemic.

Several of the album’s nine tracks, including 1957’s “Little Bitty Pretty One”, Shirelles ‘”Mama Said” and Chubby Checker’s “Slow Twistin'” were staples of the a cappella numbers that were a popular segment in Huey Lewis and the News live shows. As the band’s unofficial musical director and arranger, Colla chose the songs for these a cappella moments and arranged the vocal parts.

“I Hear Other Voices” is what the 69-year-old musician calls a “reinvention” of his 2012 album, “I Hear Voices,” which featured renditions of those same covers with Colla skillfully singing the lead vocals backed by a band. and an 11-member Chorus of some of the Bay Area’s A-list singers, including Tony Lindsay of Santana, Amber Morris of Marin and Gabi Wilson, the Grammy-winning singer-songwriter better known as HER For the new album, he removed much of the instrumental backing from the original, turning it into a mostly a cappella record that he had unsuccessfully asked Lewis and the News to make for years.

“Huey’s line of action was, ‘Let’s just keep it in our back pocket until we need it,’” Colla says. Now that the band is no longer touring and recording, its time has come.

My wife and I listened to it on a stroll through West Marin the other day, singing, basking in the nostalgia it evokes, reveling in the applause, stomping and screaming that punctuate the debates. Simply put, this album is fun. It’s music that feels good. And it’s coming out at a time when the world could use a lot more.

After stints with the groups Sound Hole and a later version of Sly and the Family Stone, Colla enjoyed great success when Huey and the News emerged from Marin County in the 1980s to become darlings of the MTV generation, producing hits such as “The Heart of Rock & Roll”, “I Want a New Drug” and “The Power of Love”. He and Lewis co-wrote the 1984 # 1 hit “If This Is It”.

With Colla playing guitar, saxophone and singing backing vocals, the group was still on top as a live actor in 2018 when disaster struck. Ahead of a concert in January at a Bay Area performing arts center, Lewis suffered devastating hearing loss which was later diagnosed as Ménière’s disease, a disorder of the inner ear. No longer able to sing on the pitch, he was forced to cancel all concerts indefinitely.

Since then he has had to deal with an illness that has no known cure. When I interviewed him towards the end of that fateful year, he confided that for the first few months he felt “suicidal”.

“You kind of want to blow your brains out,” he told me. “What’s weird is that you get used to it a bit.”

Four years later, Colla has nothing but praise for the way Lewis handled this loss, not only of his hearing and singing voice, but also of his identity as a charismatic leader, singer and performer.

“To this day, it breaks my heart,” he says. “If I had been in Huey’s shoes, I don’t know what I would have done. We have five senses, but if I lost my hearing, I don’t know how I would take it. I have the ultimate empathy and respect for Huey, the way he has held up.

He may even come back to it now with a sense of humor, remembering how he joked to Lewis at the time, “Take a deep breath. You have too big an ego to kill yourself.

He and the rest of the group had to deal with this sudden setback in their own way. Colla immersed himself in the band’s business, managing the band’s song catalog, planning future live recording releases, remixing and reworking older material, and co-producing what would be the band’s final studio album, “Weather “of 2020.

“Other than my road trips, my life hasn’t changed that much,” he says. “I have always been the man behind the curtain. I have worn several hats with the organization. When we hit the wall, my first thought was, “What now? How to make this brand last? That’s about all of my time. I’m busier now than I not only thought I was, but more than I would like. “

Busy as he has been, he was able to carve out enough time for himself to embark on a solo career. In 2002, while Huey and the News were on hiatus, he recorded and released “Lucky Devil”, his first solo album. Then came “I Hear Voices” and now “I Hear Other Voices”.

Proving that there is life after Huey and the News, he has two more albums in the box and is working in his home studio, recording more of his own music.

“It’s like the Alice in Wonderland bunny,” he says. “There is so much to do in such a short time. After all these years and all these bands, I have so much more to say. I just haven’t finished.