Hell In The Club has announced the release of a new EP, Kamikaze – 10 Years In The Slums, which includes two new songs, two covers (Alice Cooper and WASP) and a re-recorded track from their debut. See below for the full track listing.

The EP is a 10th anniversary celebration of the band’s debut album, Let The Games Begin. The new EP will be released on March 18 on all digital platforms with physical releases to follow in June. Physical copies are available on the band’s Bandcamp page.

Pre-order/register all formats here and watch a music video for “Kamikaze” below.

“We are relieved to finally be able to announce this EP. We thought it would have been nice to celebrate the 10th anniversary of our debut album Let the Games Begin by releasing something new. Not a new album, but something to we could take where we are now, ten years after we started our journey, so together with Frontiers we have planned this nice little EP which includes two brand new songs (“Kamikaze” and “10 Years In The Slums”), two covers (Alice Cooper and WASP), and a reworked version of ‘In Your Eyes’, a title that we love so much and which was released as a bonus on the Japanese version of our first album. by Alice Cooper (already released as a special Halloween digital single) and WASP’s ‘Chainsaw Charlie’, since we all agreed that The Crimson Idol is definitely one of our favorite albums. to take it out exactly 10 years after the first album, so in 2021, but because of the prevailing situation c Due to the Covid-19 pandemic, the vinyl production process suffered several disruptions, so we were forced to postpone it again and again. again. After a long wait we can finally say that Kamikaze (10 Years In The Slums) will be released on March 18, 2022 on all digital platforms and on June 20, 2022 in a very limited vinyl edition plus an ultra limited bundle which will include the vinyl, the cassette (yeah, back to the 80s!), and other goodies. Thank you for sticking with us for the past ten years!” – HITC 2022

Hell In The Club is an Italian hard rock/heavy metal band made up of members of Elvenking and Secret Sphere. The band have released five albums and are currently celebrating 10 years as a band after releasing their debut album Let The Games Begin in 2011. Featuring Dave on vocals, Andy on bass, Mark on drums and Picco on guitar, Hell In The Club will delight you, they will make you dance, sing and blow your head off with their songs. They mix classic hard rock and modern sounds, heavy metal and party songs, 50s rock ‘n’ roll and everything in between. Rock ‘n roll is all about fun and that’s been evident throughout their musical career. 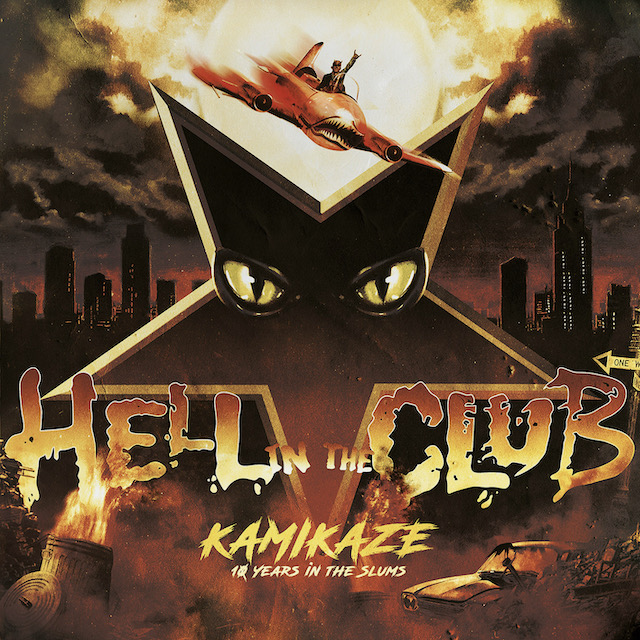