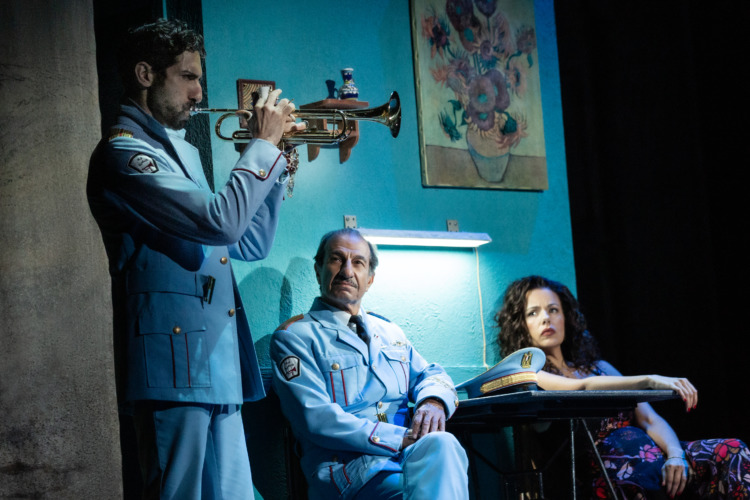 “Not so long ago a group of musicians came from Egypt to Israel. You probably haven’t heard of it. It was not very important.

This oddly low-key ad, part explanation and part warning, squeezes the books of the touring Broadway musical The group’s visit, which opened a brief race (until Sunday) at the Keller Auditorium on Tuesday evening. These words are displayed on a canvas at the very start of the show, and you might think they’re meant as a little opening joke, a light-hearted way to lower expectations. Or maybe, conversely, they are ironically meant to downplay events of great weight. The same lines are spoken again, aloud this time, just before the show closes. But at that point, we know they worked both ways.

The group’s visit, based on a 2007 film of the same name, is a little wonder. For a Broadway musical – especially so celebrated that it won 10 Tony Awards – it’s surprisingly low-key, eschewing flash and grandeur pretty much every turn, and showcasing its everyday characters not as unsung heroes but simply like people who get tangled up in mundane lives in mundane places. Yet he tells his mundane story with such emotional honesty and narrative delicacy, with such keen attention to those things that accelerate the midst of everyday life, that it borders on the deep and the deeply moving. And even then, with a flippant way that seems to say, “Oh, yeah. It’s still there too.

Of course, the main reason you haven’t heard of the Alexandria Ceremonial Police Orchestra’s Israeli visit is because it’s fictional, a premise by screenwriter Eran Kolirin. Adapted for the stage by playwright Itamar Moses (whose opening plays Contempt and row of celebrities had their world premieres at Portland Center Stage), the story begins with what one might consider a wrong turn at a phonetic crossroads. The small orchestra arrived in Tel Aviv, but no one came to greet them and take them to their destination, the city of Petah Tikvah. Determined that nothing can prevent the visit from being a success, the leader of the group, Colonel Tewfiq Zakaria, asks one of his men to buy bus tickets. “But,” objected the carefree young Haled, “my English is not that good.” This and its Egyptian accent mean that the group does not appear in the rich culture of Petah Tikvah, but in a (fictitious) dumping ground in a desert town called Bet Hatikva. Stuck without another bus until the next morning, the musicians are taken care of by Dina (Janet Dacal, both jaded and luminous), the owner of a small café, and her employees. In one of songwriter / lyricist David Yazbek’s many wonderfully pop songs, they say to their bewildered guests: “Welcome to Nowhere – with a B.”

The setup may seem ripe for consideration of ethnic / political conflicts, and the suggestion of suspicion or hostility on the part of some Israelis hovers on the sidelines, but the story takes the common humanity of its characters as a baseless foundation. big case of this. What we get instead are the quiet tensions, longings and regrets of normal life, seeming all the more poignant here as neither the book nor the songs try to pump them into something bigger. . The classic concept of the American musical is that the characters start singing when and because they reach a point where mere dialogue cannot contain their emotions. But here, the music is presented as just a part of everyday life (the band’s Middle Eastern flavored instrumentals dotted around are a treat); it is a source of joy but also a tool to cope with boredom and disappointment. In the absence of epiphanies on offer, why not sing about the little lingering feeling?

Before writing for Broadway, Yazbek produced several indie rock albums, somewhat in the mold of XTC or Elvis Costello, which are full of know-how and wit but sometimes seemed too invested in their own skill. Work for musicals such as Dirty rotten rascals imposed a useful discipline on his writing, and the ethics of sober storytelling of The group’s visit inspired by far his best work to date. His old word-nerd ways are put to good use in “Papi Hears the Ocean,” in which a shy cafe guy bemoans his anxious awkwardness with women. Right after comes a delicious contrast and antidote in “Haled’s Song About Love,” a Chet Baker-inspired ode to cool jazz that advises a relaxed approach to romance.

Through the artfully braided stories of Tewfiq and Dina, Papi, Haled, a young slacker named Itzik and his frustrated wife, and a mysterious sad sack known only as the Telephone Guy, themes of faith, hope, persistence, forgiveness, and other great ideas are slowly pushing their way into our consciousness. Some tensions resolve harmoniously (yes, we suspect, temporarily), while the show’s most tantalizing motif – the attraction between Dina and Tewfiq – ends on a blue note.

The final song, “Answer Me,” finally takes us into something akin to the more typical puffy expression of a big Broadway show, but it feels so organic and so well-deserved that a lump in your throat or a tear in your throat. eye might take you by surprise. I guess maybe it’s because all along The group’s visit let us decide for ourselves what is important to us.

Mystery and detective stories always make me guess. As in, try to guess why such tales have such enduring popularity. The basic gender question – “Whodunit?” – seems to me so rarely interesting. But for any form, there is something to be said for the work of its most masterful practitioners.

Agatha Christie’s Murder on the Orient Express, first published in 1934, is a classic that has been adapted numerous times for radio, film and television. A few years ago, the American playwright Ken Ludwig adapted it for the stage, and it is the version that Lakewood Theater presents, from January 7 to February 7. 13, directed by David Sikking. And this production has something that I find very interesting: a cast featuring formidable Northwest stage talent such as Vana O’Brien, Marilyn Stacey, Tom Mounsey, Tom Walton and Kylie Rose.

Portlander Samuel Eisen-Meyer Walk the world with this fire confronts an aspect of American life so pervasive that most of us rarely notice it – what CoHo Productions describes as “the psychology and deception of internal imperialism in the United States.”

Comprised of short films, physical installations, large-scale paintings, light and sound design, and 3D fabrication, this is not really theater, but more of a multimedia installation. Kudos to CoHo, however, for following their artist-focused mission to new places.

“” The show must continue “is rather past,” Sara Fay Goldman of Fuse Theater Ensemble told DramaWatch a few months ago, speaking about how the Covid pandemic has changed some of the fundamentals of the theater world. This outlook – and the rising infection rates reported as the Covid omicron variant spreads worldwide – combine to form a bit of justifiable caution: delaying the next production of Fuse.

Homosexuals, by Mikki Gillette, was scheduled to premiere this Friday at the Back Door Theater. But now the airing of the trans-themed piece – one of two works by trans writers in the current Fuse season – has been rescheduled from March 11 to April 10.

Best line I read this week

“Those who forget the past may be doomed to repeat it, but those who sentimentalize the past are rewarded with bestseller status. “

– Carlos Lozada in The New Yorker, from an article on (le non sentimental) In Search of the Good War: American Amnesia and the Violent Pursuit of Happiness, by Elizabeth D. Samet

That’s all I have for now. I will try to do better next time.

Marty Hughley is a Portland journalist who writes on theater, dance, music and culture. Her accolades include a National Arts Journalism Program Fellowship at the University of Georgia, a NEA Arts Journalism Institute Fellowship in Theater and Musical Theater at the University of Southern California, and First Place Awards for Artistic Reporting in the Society of Professional Journalists. Pacific Northwest Excellence in Journalism Competitions. In 2013, he was inducted into the Oregon Music Hall of Fame for his contributions to the industry. A native of Portland, Hughley studied history at Portland State University, worked for the alternative weekly Willamette Week in the late 1980s as a pop music critic and arts editor, then spent nearly ‘A quarter of a century as an Oregonian as a journalist, writer and critic. His recent freelance work has appeared in Oregon ArtsWatch, Artslandia, and Oregon Humanities Magazine. He lives with his cat, and dies a bit with each new setback from the Trail Blazers.

More stories from this author