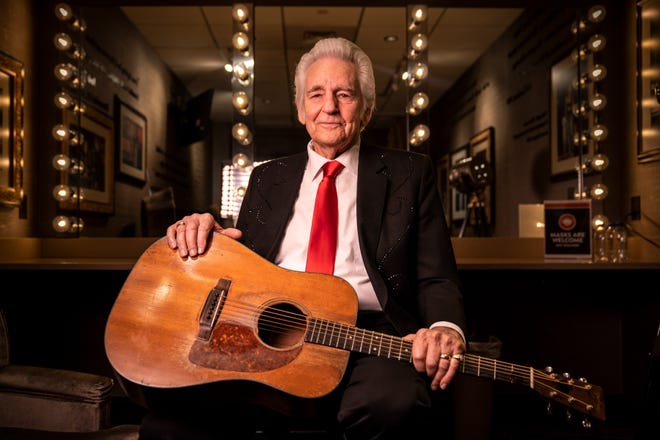 When Del McCoury needs a new song, he doesn’t enlist a cohort of co-writers or entrust one of Music Row’s famous publishing houses.

He goes to the mailbox.

Songwriters — from Canada to California and, of course, Music City — are sending pitches by word of mouth and by mail to the 83-year-old bluegrass legend in hopes of one day catching his ear . At home, hundreds of records await McCoury in a box, where he draws when the time comes to burn an album.

“They come from all over,” McCoury told the Tennessean. “There are so many writers.”

And two years ago, when COVID-19 went off the rails on tour, McCoury returned to Nashville with plenty of time to rummage through his proverbial vault of songs in hopes of unearthing a treasured tune or two. He’s listened to hundreds of CDs, according to his son and bandmate Ronnie McCoury – and now bluegrass faithfuls are hearing the result of McCoury’s demo recovery this week when The Del McCoury Band releases a new collection of songs, “Almost Proud “.

The 12-song album debuts Friday in stores and on streaming services via McCoury Music.

“I kept thinking, ‘I’m going to pull out this box of CDs and see what’s in it,'” McCoury told The Tennessean. “I have nothing else to do. I went through them and picked about 25. But we couldn’t do them all.”

He added, “I don’t really know what I’m looking for. But I like a story.”

Like when he hears a story in a song, McCoury knows how to tell a story or two. Days before the release of his album, the Del McCoury Band frontman often smiled as he held court with family and friends backstage after a standing ovation at the Grand Ole Opry – the same scene he performed in March 2020, days before COVID-19 pulled the rug back and let him sing hunting songs.

In a shimmering black suit jacket and red tie, McCoury laughed as he recalled his Opry debut nearly 60 years ago alongside bluegrass forefather Bill Monroe at the Ryman Auditorium in 1963.

He felt so nervous that “I couldn’t remember my name that night,” McCoury said.

“I was going to be [Monroe’s] singer and guitarist,” McCoury said. “The first night he said, ‘Now I want you to sing with me, but I’m going to get someone else to play guitar.’ and boy, I was nervous at first. And then standing there singing without a guitar? [That] made me more than nervous.”

His stage fright wouldn’t stick, though. Today, more than half a century later, McCoury continues to anchor freewheeling bluegrass ensembles that are full of family harmonies and expert picks. He’s an easygoing former statesman of bluegrass – a musician who took a front-row seat to Monroe’s towering legacy before modestly helping guide the decades-old genre for a class of 21st century artists and listeners.

In a sea of ​​songwriters filling his mailbox with stories to tell, what catches McCoury’s eye?

“You know what? I never know ’till He hears it,’ he said, laughing. “I like doing it, though. Listen to CDs.”

McCoury and company whittled his CD box down from hundreds of songs to two dozen and, eventually, those heard on “Almost Proud.” He and the band cut two songs – “Running Wild” and “The Misery You’ve Earned” – which McCoury wrote, despite his reluctance to be described as a “songwriter”.

“I don’t consider myself a songwriter because the only reason I write is because I have to,” McCoury said. “Songwriters, they wake up in the morning and think of a song they’re going to write that day. Since the ’60s, the only time I wrote was when I was recording a record.”

His son Ronnie McCoury added, “It worked out pretty well. Dolly cut one.”

Rob McCoury, Del McCoury’s son and band member, added, “Not bad for someone who isn’t a songwriter.”

Beyond touring and regular studio time, nothing captures McCoury’s place in the American musical fabric better than Delfest, an annual family-rooted festival in rural Cumberland, Maryland.

Now at Delfest, McCoury said he and the band played on a stage anchored by two towering video screens – a far cry from the nervous kid who took the stage with Monroe at the Opry in 1963.

Before the band’s headline, the days at Delfest are often packed with budding talent in the McCoury’s genre represented on the road since before most artists were born.

“They’re great news, they really are,” McCoury said, adding, “I couldn’t begin to name all the bluegrass bands.”

This year, he and the band are supporting “Almost Proud” with tour dates booked through November, including a return to Delfest in May.

And when McCoury gets home, maybe a few songs will be waiting.

“I happened to look at this box today,” McCoury said. “I hadn’t seen him for a year. The ones we could have recorded, they’re still in the box.”