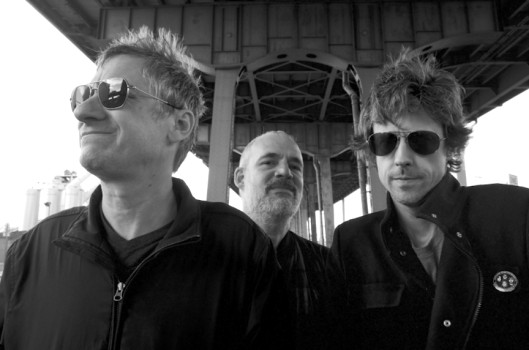 SARATOGA SPRINGS — The Figgs, a mainstay of the area’s indie-rock scene since forming in the spa town in the late 1980s, will headline a benefit concert Jan. 20 at Caffe Lena. The concert is held in honor of prolific musician and local theater artist Josh Chambers, who died in February 2021 at age 45 of a brain hemorrhage while working on an album in California.

Proceeds will go to Caffe Lena, one of Chambers’ favorite haunts, and a video of him performing four songs from a 2010 gig at the venerable Phila Street cafe will be shown during the gig. There will also be a video tribute to Chambers from actor Jon Bernthal, who founded the Fovea Floods theater group with Chambers when they were students at Skidmore College in the late 1990s before finding success on television and in the cinema, notably as the main character in the series “The Punisher”.

Dave Bengle, who with Chambers was in the band Throwdown Bouquet, which last played at Caffe Lena in 1998, and popular local band The Radio Junkies are also scheduled to perform.

Officially titled The Figgs Celebrate Josh Chambers, the concert begins at 7 p.m. and will be broadcast on cafelena.tv. Tickets are $25. Among those working on Chambers’ final album when he died was Pete Hayes, drummer for The Figgs.

A Washington County native, Chambers spent nearly two decades living and working in New York, Los Angeles and elsewhere before returning in recent years to the Saratoga that hosted his early artistic successes. He possessed a creative fecundity and an overabundance of gifts in multiple disciplines that impressed the collaborators as much as the public. Playwright, actor, director, composer, lyricist, guitarist, pianist, collage artist, music producer, and sound engineer, among other hats he wore, Chambers’ output included approximately 750 songs. Read his obituary published by the Times Union last February.

Another tribute to the life and work of Chambers has been published on the Spotify and Apple Music platforms in November. It was created by Jeff Knight, a longtime close friend whose family was hosting Chambers in their California home and working with him on an album of his original music when he fell ill. Chambers died on February 12 after being in a coma for three weeks following unexplained bleeding in his brain.

Entitled “Gods of the Underground”, the album nods to Chambers’ theatrical milieu by being structured like a play, with 14 songs over nearly two hours titled as a prologue, three acts with scenes, intermission and epilogue. Each song is credited to Knight and Chambers; although Knight wrote all the music and lyrics and created posters for the songs, he said he considered the album a collaboration between the two because Knight included Chambers’ vocals throughout, using voicemails and audio recordings in which Chambers reads poetry or simply meditates on life.

“Every song is about him in some way, and there are plenty of homages to his music, poetry, lyrics, song titles and artistry throughout the album,” Knight said.

Knight said he doubted he could make it to Saratoga for the Caffe Lena show, and because the songs on “Gods of the Underground” are heavily produced with studio effects and meant to be experienced as part of overall, they’re largely unsuited to being played alone in concert.

Instead, Knight said, the album and concert are linked tributes to one of the capital region’s most gifted and prolific artists of recent years, each suggesting in its own way a part only the production of a talented man gone far too soon.

When: Doors open at 6:30 p.m. Thursday, January 20; concert at 7 p.m.
Or: Caffe Lena, 47 Phila Street, Saratoga Springs
Tickets: $25 ($12.50 students)
information: Online sale only on caffelena.org/live-events
To note: Proof of coronavirus vaccination required for all participants
Diffusion: cafelena.tv
As well: A tribute album to Chambers, “Gods of the Underground”, is available on the Spotify and Apple Music platforms.

Do you remember Seona Dancing, Ricky Gervais’ 80s band? Nah, me neither