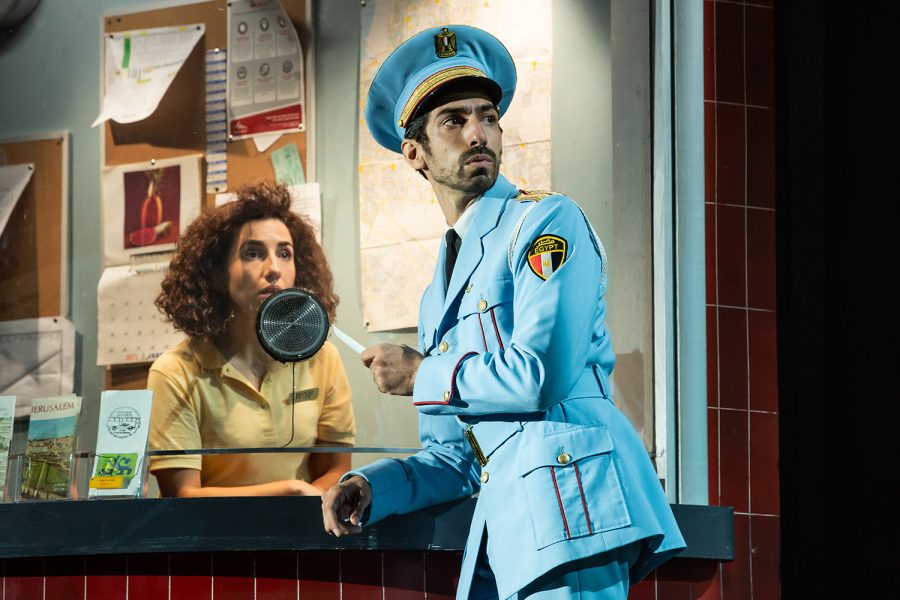 In 2016, The group visit took the stage for the first time, bringing New Yorkers to Israel with a touching story about what it means to be human. The Broadway show took home the Tony Awards with 10 wins, including Best Musical in 2018.

Now the show is coming to Hancher Auditorium with performances April 6-7 as part of its nationwide tour.

The scenario of The group visit is unique, centering around Egypt’s Alexandria Ceremonial Police Orchestra as it travels through Israel on its way to a concert in the city of Petah Tikva.

Miscommunication, however, lands the group in the remote desert town of Bet Havitka, with no place to stay and no transportation until morning. Through their breakup, the band befriended the townspeople, eventually overcoming language barriers through a shared love of music.

The musical features a mix of traditional Arabic, Middle Eastern and American jazz music, with lyrics sung in English and Hebrew, which helps the characters connect their cultures.

Related: Musical hit ‘Waitress’ to bring a slice of Broadway to Hancher

Actor Coby Getzug plays supporting character Papi, a local cafe worker who has trouble talking to girls, but eventually overcomes this fear with the help of a member of the Egyptian band.

Gutzug said his mother’s family is from Israel and he grew up attending a Jewish school and learning Hebrew. Having a role on “The Band’s Visit” allowed him to professionally explore aspects of his identity, including being able to speak Hebrew on stage, he said.

“I think there’s a really amazing cultural exchange that happens when you hang out with people who grew up differently from you or speak different languages ​​than you do,” he said. “I feel like I learn so much from my castmates, the band, the crew, and everyone I travel with, just because we all have unique experiences.”

After previously playing roles in The Book of Mormon and spring awakening, who are known for their vibrancy and larger-than-life music, Gutzug said. The group visit is more “silent and delicate”.

He said that while there’s always room for vibrancy on Broadway which is beautiful in itself, The group visit can sometimes feel more like a play than a musical with his subdued nature, and that sets his experiences apart.

This is Gutzug’s third national tour with a Broadway show, all of which have taken him across the continental United States, he said. It will, however, be his first coming to Iowa City.

“As you travel to different states, you meet all kinds of people, do all kinds of things, and go places you wouldn’t otherwise get to go,” Gutzug said. “I love being in a new town and finding the local cafe where people hang out and love going to a cool museum and feeling like I’m living that mini-life.”

Hancher executive director Chuck Swanson joined Gutzug in expressing his excitement for the national tour. He said he thought Hancher was very lucky to have been included as a stop for Group visit.

RELATED: A Legacy of Leadership – Chuck Swanson Reflects on Time with Hancher

“More than anything, I look forward to this experience – this opportunity – for our audience.” said Swanson. “You know, I love bringing the audience together with the artists.”

On national tours, most Broadway shows commit to eight shows a week at one location, but Swanson said that due to Iowa City’s smaller population, The group visit will only have two shows at Hancher before spending the rest of the week at the Lied Center for the Performing Arts in Lincoln, Nebraska. He said splitting the week was unusual and that Hancher was lucky.

Swanson said that the fact that The group visit won 10 Tony Awards is another reason Hancher is thrilled to bring the show to Iowa City, and that winning so many awards is shocking and unusual, but very well deserved.

Swanson saw The group visit twice in New York and once in Des Moines, and said it was hard to say how much he loved the show, other than how well it was able to engage audiences.

One of Swanson’s responsibilities is to interact with Broadway cast and other touring bands as they pass by Hancher, and he said he’s mostly looking forward to introducing them to staff and backstage audiences. .

“We have one of the warmest and most wonderful staff behind the scenes – and what I always say – in the world,” he said. “And then this Hancher audience, I love talking to the Broadway crews, the tour cast whenever they come and I always tell them they’re going to experience one of the warmest audiences on their tour. “

Rob Cline, director of marketing and communications for Hancher, wrote in an email to The Iowan Daily that he also looks forward to interacting with the artists who pass through Hancher and that the work they do brings the auditorium to life.

Cline noted that while he was excited to promote the show, there were challenges when it came to navigating COVID-19.

“With the ups and downs of the virus, we had cancellations and postponements throughout the season, and so we were hesitant to launch campaigns for shows as early as possible,” Cline wrote.

Now that the show’s campaign with Hancher is finally underway, Cline wrote, he can’t wait to get ready for the musical and to see the exceptional job Hancher’s Auditorium staff and cast members will do.

“The Band’s Visit, which has won many, many awards, beautifully tells a moving story,” Cline wrote. “I think the audience will connect with the characters, love the music, and have a great time during the performance.”