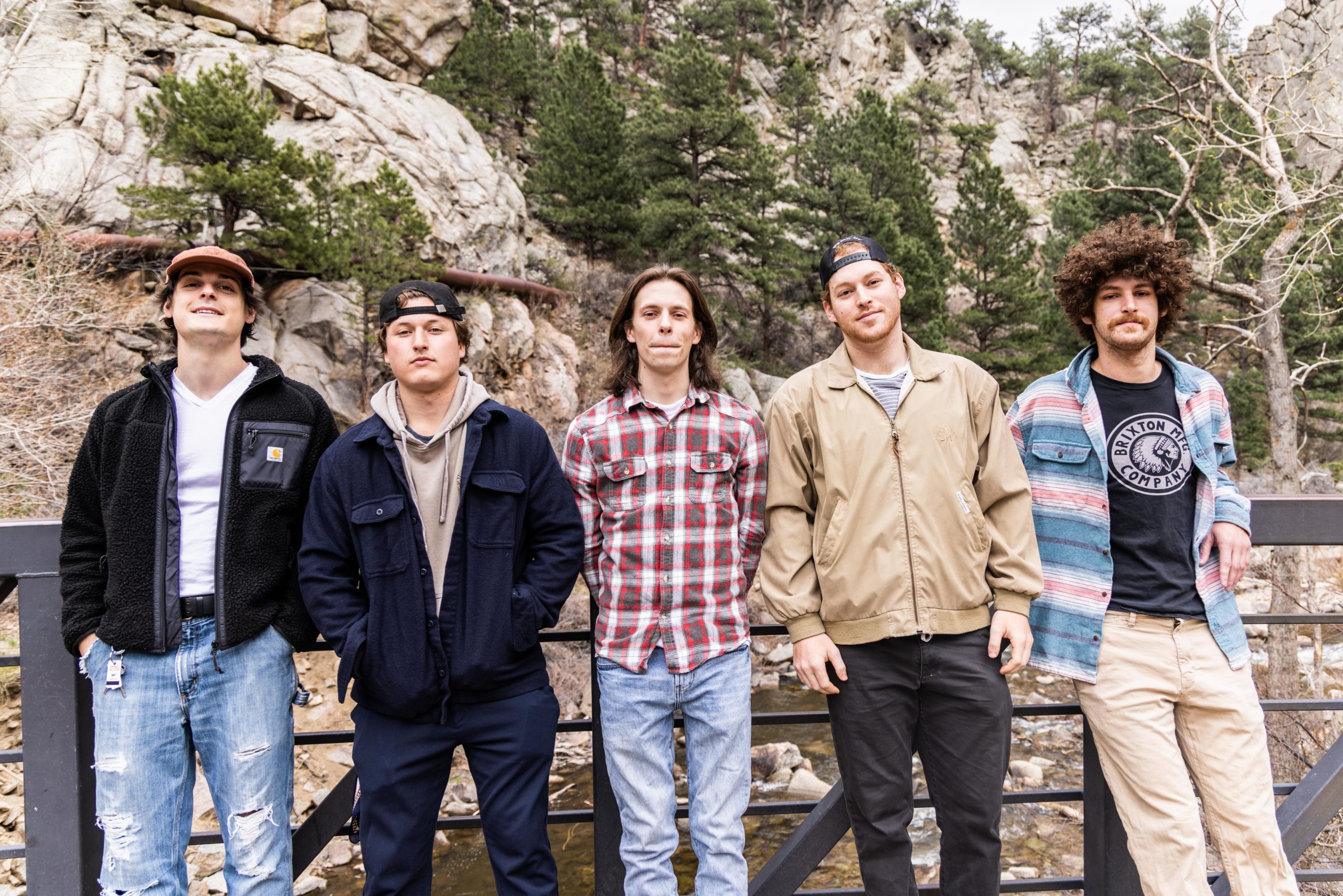 NOTTucked deep in South Boulder is a concrete basement that looks little more than a graveyard of discarded bric-a-brac: snares and toms, keyboards, a folded ping-pong table, mountain bikes, empty beer crates and a number of unidentifiable bond items under the sheets.

But a pathway divides the sea of ​​clutter, revealing an additional door deeper into the abyss – a musical lair behind lock and key. Inside, vocalist/keyboardist/manager Max Lerman hammers angelic chords into a cherry red Nord Electro 5D. On a two-seater sofa to his left, next to a row of four- and six-string beauties, sit bushy-haired bassist Ari Lerman (Max’s brother) and eccentric guitarist Willie Vogel. Directly to his right, drummer Brendan Lamb (unrecognizable without his usual attire: a cowboy hat) is perched in front of a lustrous drum set, his baby. Five thousand miles east of Barcelona, ​​guitarist and lead singer Will Rosenthal sits next to his phone on speakerphone. This room serves as the common ground for Boulder’s leading troubadours of reggaeton/funk/folk/blues/indie fusion: Mr. Mota.

The group began as a five-year series of jam sessions between Vogel and the Lerman Brothers and, in the spring of 2021, has organically built up into the hard-hitting quintet that will take the stage at the Fox Theater on May 5. .

Once officially reunited, a name was needed.

“The problem with that,” Lerman laughs, “is that every name under the sun is taken.” The group recalls some of their ideas: Pastel Lotus? No. Steal Rogers? No. “Remember the liquid chicken? Ari laughs. Really cool, but still no.

It was Vogel who hit the nail on the head. “My freshman roommate was from Puerto Rico, and I remember him always saying, ‘Where’s the mota?’ In Latin America, it’s slang for weed. Years later, I had another friend who worked in a paint shop, and he was telling me about this Latin guy who was coming in – still stoned – and my homie would tell him every time, ‘Ahhhh, Mr. Mota, you came back.’ When he said that, it clicked for me.

This twenty-something outfit needed less than 12 months to captivate a college audience whose attention seems solely devoted to EDM songs crammed into 15-second Tik-Toks. Fortunately, Boulder has ample space for both genres.

“EDM is so cool, it just has an intense way of pulling you in,” Vogel begins, “but there’s always – I feel – a level of familiarity between people our age and a drum set, a guitar, a bass, some keys and a vocalist. Boulder students, most of whom love EDM, have certainly been exposed to bands like the [Red Hot Chili Peppers]or [Grateful Dead]or Otis Redding.

Lamb points to one of Ari’s bass pedals, an envelope filter, “which here helps bridge the gap between what we play and EDM. This is our band’s version of ‘wubs’. People turn their heads when they hear it.

Max keeps it short and sweet: “[Mr. Mota has] worked because [people have] saw us somewhere. We constantly play so many shows all around Boulder.

At this point, a little less than a year after its creation, Mr. Mota’s existence has been nothing but live performances – apparently hundreds of them. No streaming songs or YouTube videos, just them and a stage, or a grass field, or the parking lot across from The Sink on Thirteenth Street. Curiously, between study abroad, COVID, and school vacations, one can count on one side the shows that have featured all five members.

In December 2021, the band – except Vogel – played their first show at the Fox Theater to a sea of ​​hundreds. The line was literally out the door, winding past the bright white awning and past Ado’s Kitchen and Taco Junky, all for a group built largely on word of mouth.

“This turnout was unexpected. It was huge,” Lamb says.

A few months later, all of the members—except Rosenthal—crammed a group of onlookers under the low, uneven ceilings of Denver’s Larimer Lounge. Again, this was a result of word of mouth – and a further extension of the band’s unwavering desire to play as many gigs as humanly possible.

“The improvisation at our shows is super appealing,” Ari says. “We haven’t really changed our setlist too much. There are songs that we are so tired of playing. But then, once we get started, we find this freedom to do whatever we want with the record. There’s no one guy making most of the creative decisions either. We all really, really respect each other’s work, what we do on our instruments. It is this kind of respect that allows us to explore our soundscape.

In there, Ari’s statement is the irrefutable proof of Mr. Mota. Despite age and a general disregard for musical production, each member is both extremely experienced and incredibly talented. Vogel churns out his favorite jazz chords like script: “Major seventh, minor nine, major nine, dominant thirteen…” he speaks passionately. “We have this song where it’s D major six but when you put your thumb on it it’s a D major seven but still a D major six…so you have a high E which makes it a Lydian mode….”

Abroad, Rosenthal, who released his first solo album, William, on April 20, spent his spring months metaphorically setting fire to Spanish clubs Jamboree and Marula Café, alongside musicians who didn’t speak a word of English. Max and Ari Lerman are musically inclined cowboys; you’d be hard pressed to name an instrument they couldn’t – or didn’t – break through, especially the saxophone – a deep-rooted family tradition. Lamb is the backbone of percussionists in two bands: Mr. Mota and Civic Duty. In early February, he opened with Mr. Mota for Shady Oaks. At the end of the set, everyone came off stage except Lamb, who slung a strap over his shoulder and returned to his third role as Shady Oak bassist.

The band’s propensity for fusion comes from a list of genre-agnostic musical influences, citing everything from rock bands like Rage Against the Machine and Led Zeppelin, to funk purveyors like Vulfpeck and the Red Hot Chilli Peppers, to by the brilliant psych-rock of Tame Impala and Stick Fingers, and the mind-bending jam work of Phish and Goose.

Between taste and talent, there is something for almost every music fan in the band’s production. But if Mr. Mota’s music doesn’t soothe his palette, his personality sure will. It’s a trait best exemplified on the band’s social media. On Instagram, the band is unapologetically sincere: a collection of high-quality live photography, simple and humorous images (often featuring the band’s mascot; a meter-tall wooden butler statue with the Mike Tyson’s face tattoo) and “karate pitches”—courtesy of Ari.

Considering the group’s role as a group of college-age guys whose music exists in the backyards of Tenth Street and Euclid, one could reasonably argue that Mr. Mota carries a torch than house rockers like Big Head Todd and The Samples wore in the early-’90s. But then again: They’re just having fun with them, which customers are sure to notice during the band’s May 5 show at the Fox Theater, titled “Mr. Mota’s graduation party.

“We’re leveling up,” Max says of the band’s second Fox show. “We will have so many originals. We have this horn section playing with us. The Knuckle Pups and the High Street Joggers Club also perform, two amazing bands. There will of course be college students, but also parents. People who took a chance and came to see us last time are coming. Friends, fans, everything.

Max and Ari say a third member of the Lerman family will join them on stage at Cinco de Mayo. Their uncle Danny, a renowned jazz saxophonist who has toured the world, brings his talent to the stage.

Above all, what makes Mr. Mota’s return to the Fox Theater special is the band’s full presence. This will be the first time the five members will be together in front of a live audience. They’ve captured hearts and ears, earned respect from venues from Boulder to Denver, and are planning a summer tour of Colorado’s mountain towns. They have gained popularity in an era of streaming without a second of recorded music on streaming platforms.

It’s no exaggeration to say that, nearly a year from now, the May 5 Fox Theater will be Mr. Mota’s first “real” show. And just as sure as God made green apples, they’ll blow the roof off that sucker.